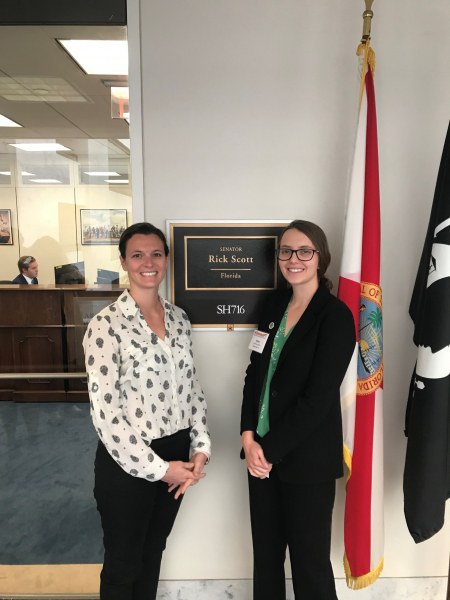 The department was well-represented at the APTA’s 2019 Federal Advocacy Forum where two DPT students had the opportunity to participate in the three-day conference held March 31 through April 2. Hannah Belles, a second-year DPT student, and Alyse Hausman, a first-year DPT student, both received travel grants on behalf of the Florida Physical Therapy Association to attend the forum.

Belles and Hausman joined Elisa Gonzalez-Rothi, DPT, PhD, research assistant professor, to Washington D.C., where the attention of the forum mainly focused on the opioid crisis. The #ChoosePT campaign has made significant headway in recognizing the efficacy of physical therapy in pain management, as opposed to prescription opioids.

“Although PT is considered by many to be the safest and most effective nonpharmaceutical option for pain management, there are still many barriers that patients are confronted with when seeking treatment,” Hausman said.  “One of the main lobbying points to bring to Capitol Hill was to inform the senators and congressmen of an upcoming bill that would motion to include PTs in the National Health Service Corps. If added to the NHSC, PTs would have an opportunity to receive loan forgiveness if they were to practice two years in a rural area or underserved healthcare center.” 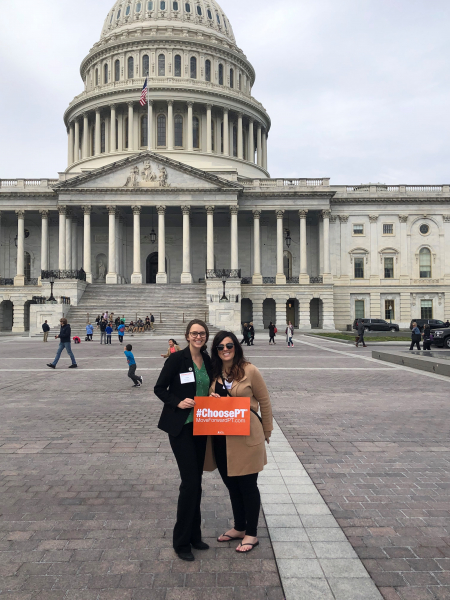 Hausman explained that support for this bill would help twofold — DPT graduates could tackle their increasing student loans while also providing essential healthcare needs for patients in areas that need it the most.

“As a first year DPT student, being able to see firsthand what the APTA does for the profession has been an invaluable experience,” Hausman explained. “Anyone can be involved in advocacy within PT. Everyone in the field of physical therapy has a story, and it is our duty to share it with anyone that will listen.”